A bigger mount. What a bright idea.

It’s your story. Tell it beautifully.

4K Ultra HD and time-lapse, 1080p slow-motion, filters, effects and so much more.

Edit videos on the fly.

Shoot a clip, trim it right in the camera, send it to your phone and post it without missing a beat.1 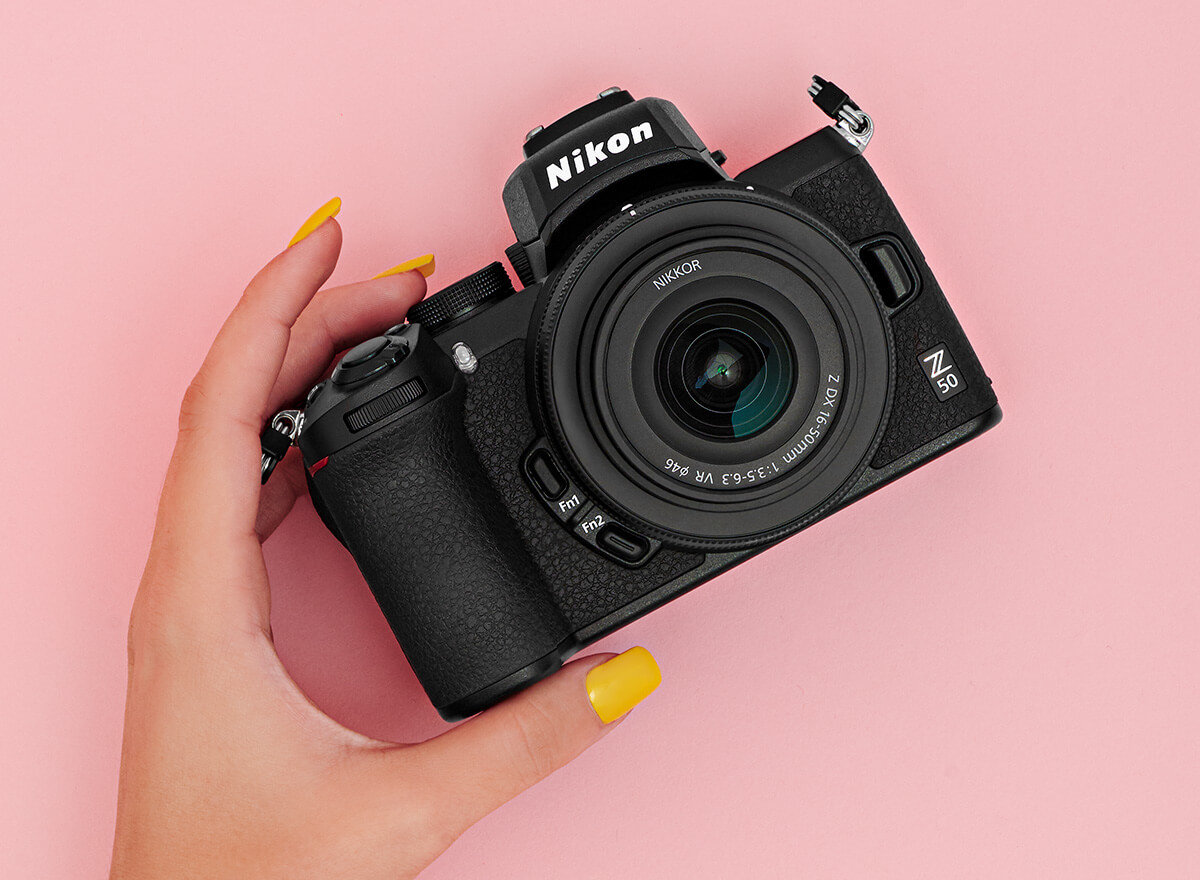 The power of Z, only smaller.

Z 50 delivers the award-winning performance of Z series in the smallest interchangeable lens DX-format camera ever.2

Have camera, will travel.

Works with your smartphone.

Built-in Wi-Fi® and Bluetooth make sharing a snap. Install Nikon’s SnapBridge app, and your Apple® or Android™-powered phone becomes a powerful accessory for Z 50. Easily transfer photos and videos from the camera to your phone, and even use your phone as a remote monitor to see what Z 50 sees, adjust camera settings, take pictures and record video.

With a 20.9MP DX CMOS sensor, a robust EXPEED 6 engine and the light-gathering advantages of the wider Z mount, photos and videos shot in low light look clean and professional.

See for your selfie.

Flip down the LCD screen to activate Self Portrait Mode—perfect for taking selfies and for vlogging.

Eye catching in so many ways.

When shooting photos, Z 50’s outstanding autofocus system can lock onto your subject’s eye and keep focus there, even when they’re in motion, for beautifully focused portraits.

Get creative with unique mood-setting filters and effects. Z 50 includes 20 high quality Creative Picture Controls and 10 Special Effects, all of which can be previewed in real-time and applied to both photos and videos.

When you need to be a fly on the wall—capturing intimate moments, candid portraits, wildlife, music and more—turn on Silent Photography Mode and shoot in complete silence.

Form and function in complete harmony. 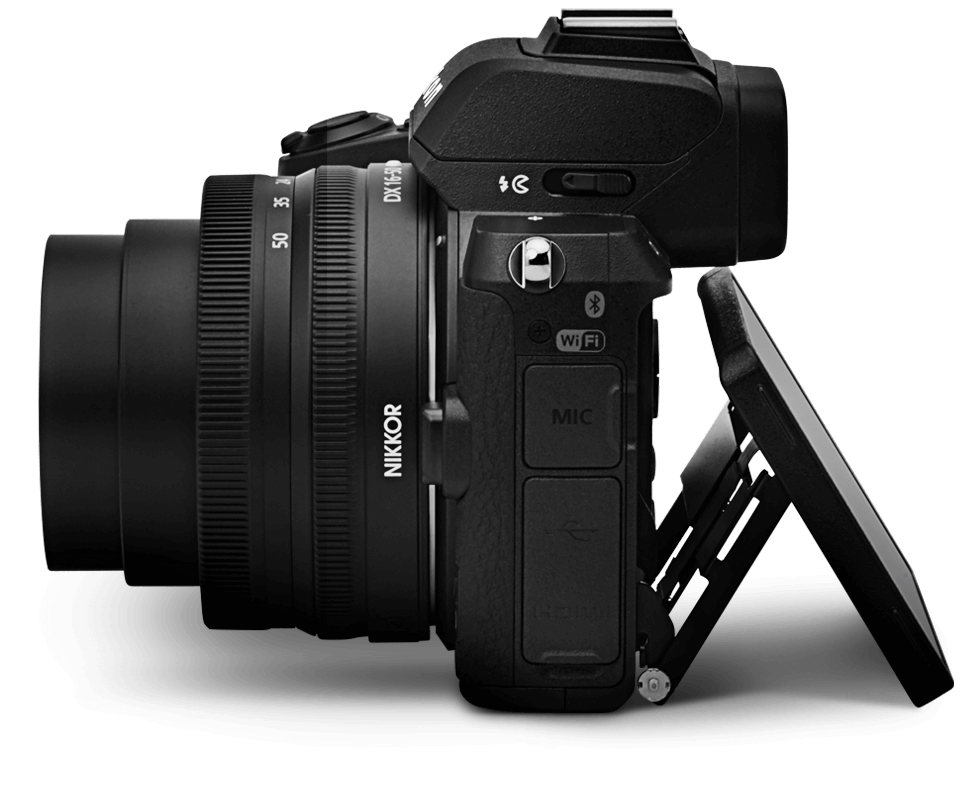 Electronic Viewfinder is slightly extended for a more comfortable glare-free fit against your eye. 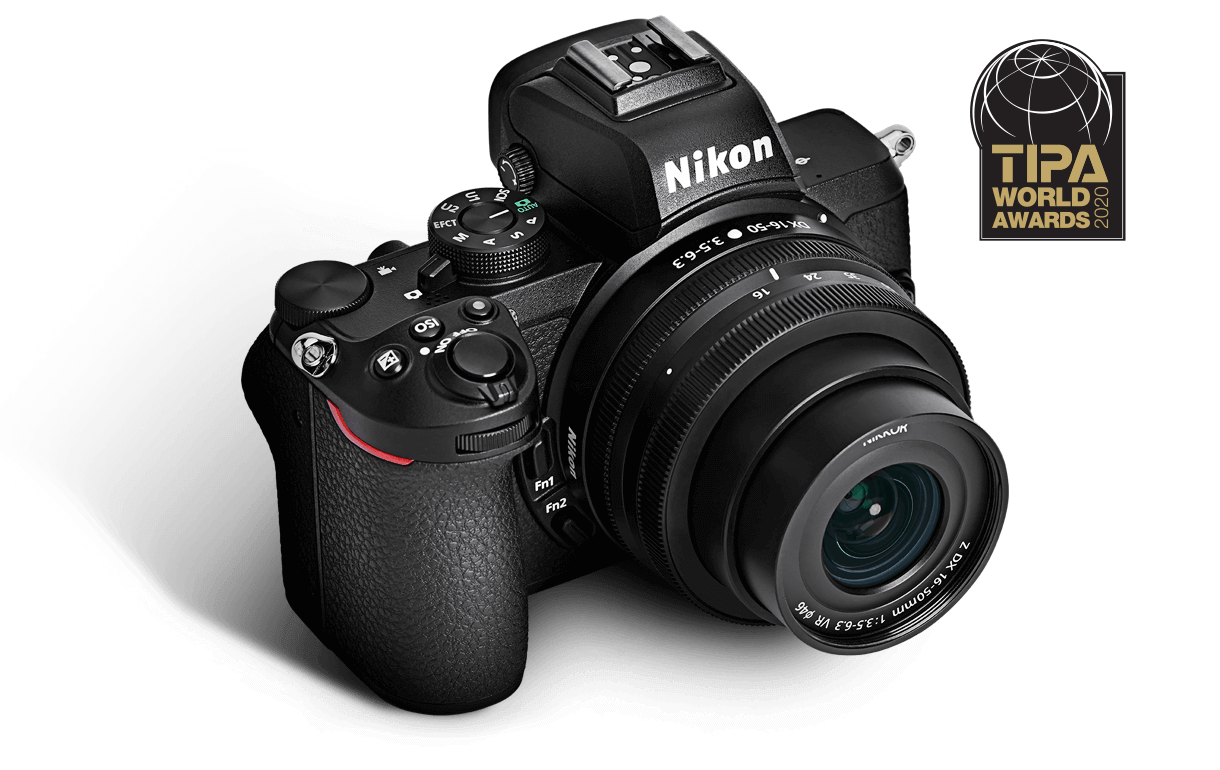 Extreme attention was paid to the placement of each button and dial for comfortable, efficient handling.

You can feel the quality. Well balanced, deep grip, magnesium alloy construction...sturdy in every way.

Oh, what a viewfinder.

Feast your eyes on Z 50’s stunning high-resolution Electronic Viewfinder (EVF). It activates when you bring the camera to your eye, and it shows you exactly how your photos and videos will look—preview Creative Picture Modes, filters, effects and camera settings in real time.

A touch of genius.

Swipe through photos and videos, touch to focus, navigate camera menus as easily as using a smartphone with Z 50’s large high-resolution touchscreen.

Z mount. One size fits all.

Your lens collection can grow with your creative aspirations. Z 50 works with all the cutting-edge NIKKOR Z lenses and approx. 360 compatible DSLR lenses (with the optional Mount Adapter FTZ).

Updating to Version 2.6
Images downloaded to the smart device with version 1.x will no longer be displayed in the Gallery after you upgrade to version 2, but can be viewed in the “Photos” app provided with the smart device.

For compatibility and to download the application, please visit:

Apple, the Apple logo, iPhone, iPad and iPod touch are trademarks of Apple Inc., registered in the U.S. and other countries. App Store is a service mark of Apple Inc.

Android and Google Play are trademarks of Google Inc.

Wi-Fi® and the Wi-Fi CERTIFIED logo are registered trademarks of the Wi-Fi Alliance.

The Bluetooth® word mark and logos are registered trademarks owned by Bluetooth SIG, Inc. and any use of such marks by Nikon Corporation and its Affiliates is under license.

LCD, Video and Photo Gallery images are for illustrative purposes only.